“With Justin the force is strong and the crumb is good” 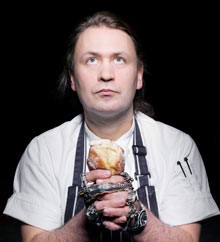 Baking has always been part of my life. My mother used to bake bread most days when we were children, and even at my first job at Crowthers, a family-run restaurant in East Sheen, London, where my first job was washing dishes, I would help to bake the bread until I moved on to do cooking and pastry.

I met my wife, Louise, when I was sixteen and heading to Hounslow catering college. We were in the same class, and one of the many reasons we are still happy together after twenty-four years, is that we both understand the demands of a life as a chef or baker.

After Crowthers I worked in many other restaurants: in Cheshire at the Rookery Hall, in Maine, USA where I cooked up a storm on Little Cranberry Island, and at The Green House in Mayfair London to name but a few.

But it was only when I joined Fergus Henderson at St John Restaurant that I really fell in love with baking. Even in my early days as a chef, I always liked cooking ‘nose to tail’, so when an opportunity came along to work at St John I dived in. Those were the most amazing thirteen years: I found my calling in pastry and baking in the first few months.

One of the turning points was when I did my first bake at St John. The bread and the crackling of the crust just didn’t stop singing to me. I hung up my chef’s apron and put on a baker’s, and never looked back.

I owe Fergus Henderson and his partner and co-founder of St John, Trevor Gulliver, so much. There were many joyous occasions at St John, but one of my proudest was receiving our first Michelin star when I was Head Baker and Pastry Chef.