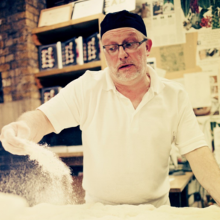 After studying archaeology in Paris, Manuel moved to London in 1987. Inspired by the food scene which was starting to explode, he made the decision to swap careers and try his luck working in restaurants.

Manuel gained experience as a chef and worked his way up through the ranks of various West End eateries. At the same time, his interest in bread really started to establish itself and he spent his time away from work reading and experimenting at length with different doughs.

However, it wasn’t until he joined the team at St John in Clerkenwell that the opportunity to apply his self-taught baking knowledge presented itself. Manuel filled their baker’s vacancy and before long, he was baking not only for the restaurant but for the whole neighbourhood!

After leaving St John, Manuel worked in many bakeries in and around London with one particularly long spell spent at Flour Power City Bakery working alongside its then owner Matt Jones. Matt then went on to start Bread Ahead, and when they were in need of a bakery school tutor, Manuel was keen to jump on board.

At the end of the day, baking is a passion for Manuel and he loves sharing his knowledge with keen home bakers: after all, he was one of them at the very beginning.